A 40 Year Love Journey: The Healing Story of a Little Brown Girl 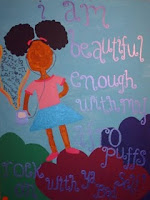 The Little Brown Girl
She's only 7 years old.  However, she has technically lived on this earth for more than 40 years, given birth to a child, experienced years of life lessons, inspired hundreds of people, raised millions of dollars, traveled the world and accomplished many professional and personal feats.
Perhaps you have seen her before...she is that little brown girl standing on the corner holding three balloons (two yellow and one white) in her left hand while simultaneously twisting her pink satin hair ribbons with her right hand. She is the little girl with the bright smile, tiny gold hoop earrings and two afro puff ponytails placed on opposite sides of her head.

She always wears a beautiful pink summer cotton dress adorned with white lace trimming. (This is her favorite dress because her grandmother-- the one person that loved her unconditionally-- bought it for her from Naman's department store in downtown Mobile more than 35 years ago just for being a good girl at school.)  She also proudly dons her favorite shiny white patent leather shoes (with a few scuff marks) and fancy dress socks trimmed in white lace and embroidered with tiny pink flowers.
The Family
The little girl's family loved her dearly.  Her mother called her Sweet Chocolate Chip, her grandmother called her Ma and her aunts and uncles always called her Baby Girl.  However, she secretly always wanted to be called Princess--but only by her Daddy if they would ever meet again. She vaguely remembered meeting her Daddy once but that was such a long, long time ago.  She often wondered would he remember meeting her.
The Wait
She's a patient little girl that consistently stands in that same spot on the same corner, in that same pretty pink dress, with those same balloons for more than 38 years waiting for her Daddy to pick her up. She always believed in her heart that he would come back and take her for ice cream. Therefore, she filled up all of her time with activities and got through her days by working, leading projects, singing, and talking with her friends.
She never told her friends that she was waiting on Daddy.  Her friends only believed she was loved by her family.  Everybody thought she was a smart and happy little brown girl.  For the most part, she considered herself almost happy except she knew that everything would only become perfect when Daddy came back.
The"Brokenness"
As an innocent little girl she knew the sweetness of being loved unconditionally; however she also knew the bitter taste of being rejected. For years she never knew what to call those strange sensations in the pit of her stomach that came each time she felt "unloved and unwanted". However, she could vividly remember the very first time she felt those strange emotions--it happened at her "other" grandmother's house in Mississippi after seeing a picture of her absent father standing next to her sister (that was only 2 years older) sitting at her grandmother's table while flashing big radiant smiles. 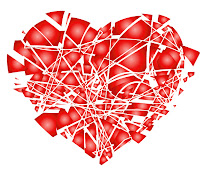 The Messages
During this visit to Mississippi the little brown girl carefully studied the family photo and couldn't understand why she wasn't in the picture. As she looked through the photos with her grandmother she remained quiet and painted her face with a great big smile.  She never told grandmother how she felt seeing the picture of the happy father-daughter pair that didn't include her.  Privately her active mind created strange messages such as, "What's wrong with me?  How come he loves her but not me? Why am I not good enough? Can I prove to him I am a good girl?  How can I make him love me?" 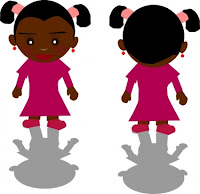 The Twins
It was much later in life that the little brown girl realized that those strange messages were actually twin emotions and their specific names were Rejection and Abandonment.
The little brown girl didn't particularly like the company of Rejection and Abandonment so she hid those twin emotions and buried them deep, deep down in her heart. She even tried to erase those emotions and feelings from her memory.  She almost succeeded until the day her heart was broken wide opened and shattered into a million pieces by that tall boy from down the road. 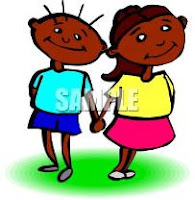 The Playmates
The little brown girl really loved that tall boy from down the road and thought he would be her playmate for life.  They danced, they laughed together, they sang their favorite songs, they dreamt together and they even played house for many months.
Although the tall brown boy had also lived on earth for more than 38 years, was divorced and had fathered two children-- in reality he was still that 8 year old little kid inside.  Ironically, he too didn't have a relationship with his Daddy either and in fact he didn't even know his real father.  But the tall boy said that this didn't bother him because he was big and strong.  He never talked about it.  But she knew he cared. 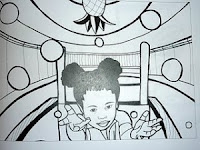 The tall boy constantly told the little girl that she was special and that he deeply loved her.... but sometimes he made her feel like she didn't really matter.
One day for some unknown reason the tall boy just picked up his toys, left the sand box and moved away. There was no reason given, no explanation, and no real discussion.  He just left the little girl in the sand box to play all by herself.
The Intruding Thoughts
As soon as the tall boy moved away the little girl's twin emotions of Rejection and Abandonment came back, tapped the little girl on her shoulder and demanded their rightful place in her heart and mind. She was now in a state of shock with a shattered ego, fractured feelings, and a broken heart. The little girl no longer had the strength to hide, wrestle and/or lock those strong emotions and feelings away. Her resistance was low. 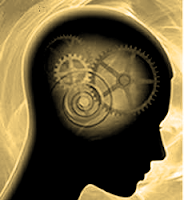 Therefore, those twin emotions anchored themselves in the center of the little girl's mind and slowly took over her daily thoughts. Each day the intruding thoughts became stronger and stronger. Before long her thoughts led to many restless nights and tear filled days.
The Resurfacing Messages
The little girl finally accepted that the tall boy was never coming back but now she heard those old messages louder than ever in her head.  They were the same exact messages she felt when she thought about Daddy. In every quiet moment she could hear those familiar messages, "What's wrong with me?  How come he loves her but not me? Why am I not good enough? Can I prove to him I am a good girl? How can I make him love me?"
Seeking a ComfortingWord
The little brown girl was so tired of hearing those messages.  She needed immediate comfort and relief from the pain. She began to reflect on the things her grandmother taught her that would help her feel better.  She remembered that her grandmother--the one that loved her unconditionally--had always said that "God's word" could bring her comfort in the time of need. Therefore, the little girl picked up her bible and began to seek for the "word" that would bring her comfort.

One morning she sat down in her quiet corner and read Roman's 12:2 that stated, "And do not be conformed to this world, but be transformed by the renewing of your mind, so that you may determine what the will of God is, that which is good and acceptable and perfect."
To be continued......
Stay Tuned for Part II: "Let the Healing Begin"

This is so brave Tosha Brown...this is a hard journey, but one worth taking...just know you're not alone. Love you!

Awesome, awesome. Self awareness is a powerful spiritual healer and important step on the path to inner happiness. I'm so glad you're sharing your blog with us. I'm taking it in and am becoming better for it. Thank you for broadening my perspective and helping me to see me more clearly.

You're not in this alone.

Beautiful story and full of love, light and truth!