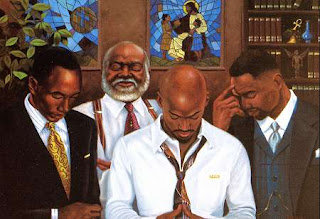 Last week on Father's Day it was my intention to post a blog dedicated to black men.  On this particular holiday I am always very reflective about the role of the many great father's around the world, particularly in my community. For years this has been a bittersweet day for me.  Bitter in the sense that my own father was never active in my life; but also sweet because so many other fathers blessed and seeded into my life.
As I get older and wiser I realize that sometimes things don't happen as we think they should.  However, God ultimately gives us everything we need in order to develop, grow and prosper.  Throughout my life God has placed good men in my path as a part of my journey. I have learned a lot about manhood by watching the men in my family, my male friends,  my former boyfriends and personal mentors.
Below I would like to share a few lessons that I have learned from two black men in my family that greatly impacted and shaped my life. 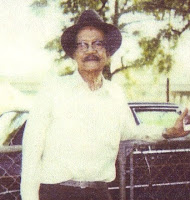 ALL Things Are Possible
I loved my granddaddy and thought he would live forever.  He died in 2008 at the age of 104.  What I remember most about my granddaddy, Joseph Gamble Sr., is that he was a very smart, wise, quiet and humble man.  He rarely talked so when he said something you knew that you needed to listen.  Only his immediate family knew his other skills and hobbies as a folk artist, avid reader and political commentator. (Interesting Fact: My granddaddy was the ONLY Democrat that I ever knew that liked President George W. Bush)
My grandfather was the son of a white farmer and black woman in the early 1900's in Alabama.  He loved his family and would always tell  me stories about his childhood "up the country".  He especially liked to tell stories about his extremely colorful and resilient father.   My grandfather said that his Dad loved his boys and gave each son their own business (i.e. a "whiskey still") on their respective 18th birthdays. Most of granddaddy's favorite stories were centered around the adventures with his brothers while making whiskey and "running" moonshine. 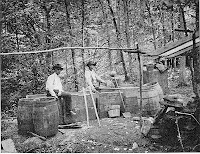 What I found interesting about my granddaddy is that even though he was the least formerly educated and (least) traveled member of my family he was the MOST open minded.  My grandfather dropped out of school in the third grade and only traveled outside the state of Alabama 2-3 times during his entire lifetime.  Yet it was my grandfather that was always the most excited to hear about my travel adventures to Cuba, Africa and Europe. (He was very excited when I went to Cuba because he was secretly fascinated with Fidel Castro and the "communist".)

One of the other things that fascinated me most about by granddaddy was his unwavering belief in supernatural events. He often shared stories about unexplainable events like finding unexpected money to pay a bill in the exact amount needed, witnessing strange incidents occurring in nature and having chance encounters with people that were possibly angels. He loved watching the news and would often read books on dianetics, spiritual writings and Christian science.

I think the most important lesson that my grandfather taught me was to look beyond what I could see in the natural world and be open to experience the vast possibilities in the universe.  My grandaddy taught me to widen my horizons in thought. He taught me that God has no boundaries.

Never Take Love for Granted
I sincerely believe that God gives every human being a guardian angel on earth that loves you unconditionally.  My brother, Marcus Christopher Brown, was that angel for me.  He believed that his big Sister Tosha, could do anything, knew everything and someday would "be somebody".
There is not a day that goes by that I don't think about my deceased brother. He was my younger brother and only sibling on my mother's side.  Unfortunately, he committed suicide on Thanksgiving Day in 2003.  It was a very sad and unexpected blow for my family.
My biggest regret and life lesson learned from my brother is the importance of  not taking love for granted.  As my mother's oldest child, I never imagined that my brother would die before me. (And especially in his early thirties) I thought that I would have my little brother around to boss during my entire lifespan.
In hindsight, I now realize that I took his unconditional love and belief in me for granted.  It was only after his death that I realized how much pain Marcus was going through and that he needed help from his family.  Unfortunately,  I was personally too wrapped up in my own life to even recognize the depth of brother's pain.  This is something I sincerely regret.

For months, the reality of my brother's death caused me to struggle with tremendous feelings of guilt and remorse.  However, one particular day as I was thinking about all the things that I should have or could have done better to save my brother's life I heard a voice in my spirit.  The message was very simple, "Do you think that you could have saved him but I couldn't? Don't you know that life and death are in MY hands not yours."  It was at that very moment that I released the guilt and reflected on the larger lesson that Marcus taught me.......never take love and/or those whom you love for granted. 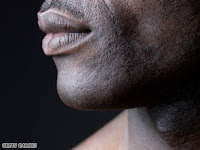 Black men have taught me so much about life and love.  The men in my family are only a small fraction of men that have positively impacted my life.  I have learned from my friends, ex-lovers, leaders and coworkers.  Much of the breadth and depth of my life experiences have been a direct result of my relationship with the brothers that I loved or the ones that loved me.
Today I encourage you to take the time to reflect and be thankful for all of the men that God has placed in your life.  The brothers have certainly added the texture to the fabric of my life.
Thank you black men!
Posted by LaTosha Brown at 1:04 AM