All My Sisterfriends Are Superheros

Well I guess the word is out...I can no longer keep it a secret that ALL of my sister friends are in fact--Superheros! Therefore, I must publicly acknowledge that I too am a member of a prestigious, phenomenal, justice loving, take-care-of-business, open society of diverse freedom fighters better known as Black Women.
I have personally witnessed the special abilities of these women to jump (in a single bound) over 5 flights of stairs to prevent a baby from falling, take care of 3 generations of family members simultaneously on one income, single handedly raise children with little to no financial support, give unconditional love to the unlovable, create businesses with only a wish and prayer, win legal cases that were considered "un-winnable", resuscitate and revive the spirits of husbands, lovers and friends, and encourage black children to believe in their greatness in the midst of negative environments and circumstances.
These humble women have kept their personal superpowers a secret to avoid the extra attention and scrutiny. They disguise themselves as everyday workers, homekeepers, leaders, wives, mothers, daughters and friends but the TRUTH is that they each are far from being anything average.  These modern day (s)heros have extraordinary listening abilities, prophetic gifts, unceasing prayer skills, amazing healing powers, supernatural emotional strength, unlimited courage, built-in-human GPS navigation systems and the mastery of communication.  Additionally, they all have a special ability to multi-task; plus extra sensory perception that allows them to feel when their love ones are going "through something" even hundreds of miles away from home.
As part of the sisterhood,  I am bound not to reveal the identities of my super sister friends without permission. Therefore, in an effort to protect the privacy of the innocent I will only share the Superhero alter-ego names of a special group of my friends known as the Fantastic Five. 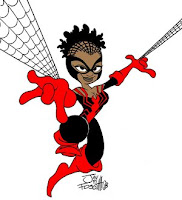 #1. Tanzanite: As her name suggests she is a rare and indestructible gem.  She is remarkably strong, incredibly thoughtful, and amazingly dependable. She is highly communicative, extremely smart and a natural born leader. Her mission is to help 'Nspire and green the planet.
SUPERPOWERS:
Voice Mobilization Power: She can inspire, encourage and move hundreds of people to action with her voice.
Quantam Transport: She can travel across the globe faster than the speed of light.  She has been spotted in 36 states and 13 different countries.  This sister is always on the move while doing something positive.
Last Sighting: She was last spotted at Twist in Buckhead with an uniquely handsome Haitian man and later that evening overheard planning for an upcoming Delta homecoming reunion.
WEAKNESS: Red Velvet Cake and Undependable people

#2. The Lioness: She's fierce, protective, imaginative and thoughtful. She is also remarkably strong and incredibly intuitive. She protects all the members of her pride with the fierceness of a lion(ess). She conquers new territory, discovers new lands, protects the weak, and organizes the strong and willing.
SUPERPOWERS:
Charismatic Magnetism : She attracts, wields and yields many forms of power. She is able to draw powerful people and resources to her pride through her magnetic personality, striking beauty and gift of charisma.
Universal Energy Connector: She connects people and energy sources through her unique ability to mesmerize, negotiate, and persuade.   She has a strong intuitive ability to be decisive and is bold and daring in her leadership.
Last Sighting: She was last spotted riding in a super clean black corvette in Fayette county with  her "Lion" super hero and life partner. She was also spotted closing million dollar deals to help the poor areas in the City.  It was also reported that she once fearlessly stopped an "offender of justice" from closing down a local fire station through direct action.
WEAKNESS: Anything ANTI-orange

#3. Knowledge Cypher:  This sexy heroine is the original protector and keeper of all Hip Hop knowledge and history. She's fiery, creative, outspoken and artistic.  She has an exceptional ability to give power to words and maintains a repertoire of thousands of movies, musicals and hip hop lyrics.  She has a special craft with language, superb intellectual abilities and is a natural born leader.
SUPERPOWERS:
Word Master: She can write and speak words that can make you scream, laugh, cry, smile, think, or break-out-in praise. She can equally throw some cut-to-the-bone choice words that will make you cover your ears, seek professional ego repair or call your mama for a hug.
Exceptional Memory: At the drop of a hat this heroine can recall every musical note, beat and rhythm of musical greats like Miles Davis, Biggie Smalls, A Tribe Called Quest, Louis Armstrong, Erykah Badu, Nina Simone and Mary J. Blige.
Last Sighting: She was last spotted at an art sanctuary in Philly and later that evening publicly reciting For Colored Girls That Considered Suicide When the Rainbow Was Enuf.
WEAKNESS: Booty Music disguised as Hip-Hop 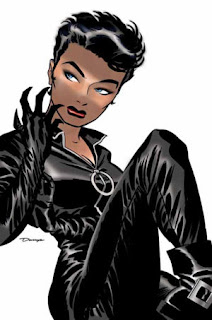 #4. Madame Le Magnifique:  Magnificence is her formal name but this super heroine is the ultimate woman of mystique. She has the voice of an angel, the fierceness of a warrior, the ingenuity of a genius, and the cleverness of a black panther. She is not only a "Queen of the Talented" but she seeks out and mentors upcoming ladies-in-training for the Princess Kingdom Circle.  She has a sense of humor, serves as a gatherer of gifts and a outstanding nurturer.
SUPERPOWERS:
Power of Persuasion: She has the gift to persuade people to operate at their highest level.  However, she doesn't take well to con-artists and game players.  She has been known to stop her adversaries in their tracks through an uncanny use of language, a unwavering gift of courage and (it's been reported ) that she is also a master in hand-to-hand combat.
Gift of Song: As a songtress, this heroine has the special ability to calm distressed hearts, revive broken spirits and bring joy to those that listen to her sing.
Last Sighting: She was last spotted in Tuscaloosa, Alabama recruiting potential super heroines to attend pre-Queen training. She was also later seen setting up a celluar phone business.
WEAKNESS: Untruthful people and bad customer service 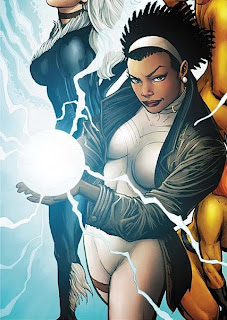 #5.The Lightbearer:  This remarkable heroine serves as a bearer of light to help humanity connect to "the way". She is a wisdom seeker, truth speaker and devoted follower of the source of all life. She's compassionate to all (wo)mankind and a renowned caretaker of future black male generations of the world. She has superior intellectual abilities. She also has multiple gifts of foresight, insight, prophetic abilities, creativity and intuitiveness. She is a giver, a healer,  a lover and has the best legal mind in the universe.
SUPERPOWERS:
Extraordinary Wisdom: Like an ancient spiritual sage, she has the gift of insight.  She has been bestowed the special gift of wisdom from her Creator and is heavily anchored in her pursuit of truth, peace and justice.
Creative Power: She is a visionary and has the supernatural power to speak words of healing, encouragement and the extraordinary ability to turn ideas into creative expressions and artforms.
Last Sighting: She was last spotted with super hero "Profesor Black Liberation" and three beautiful male children on the way to a baseball field in southwest Atlanta.
WEAKNESS: Uninformed medical professionals and zumba exercise tapes
I am confident that you know someone like these special friends of mine.  It's very likely you may actually know one of the Fantastic Five personally. You have probably talked with and walked by these inconspicuous (s)heros in supermarkets, school assemblies, boardrooms, church services, night clubs, courthouses, parks and/or concert halls.  Amazingly, there are thousands of sisters just like them out there!  This is just the tip of the iceberg in my own personal sister friend circles.

Most importantly, rest assured that the forces of evil are on notice and know that the world is a safer and better place because of these praying, praising, standing-in-the-gap and fighting-for-what-is-right women (s)heros. Now you know why I LOVE my Super Sisterfriends
(Stay tuned for future unveilings of more of my super-friends including the Fiery Four, the Sensational Six and the Talented Ten.)

Posted by LaTosha Brown at 3:36 AM

Tosha, I LOVE this!!! So creative and inspiring!

Tosha, you are such an amazing writer, and i have to agree with Kristen, very creative. I love you sista!

This is beautiful!!! We sistas get the job done lol!!!!

I enjoyed reading this sis!! You have some phenomenal sisterfriends, which means that you too, must be a phenomenal woman!! This post is soo encouraging to women such as myself trying to succeed. I will definitely add your blog to my blog roll as well as continue to visit!! Thank you for such a wonderful post!!

OMG I love this! I'm so glad you found my blog and I found you.

Get down Tosha Brown you are the QUEEN of the Superhero bunch!!! You move us to do better because you I have watched you take nothing and transform it into something. I am so elated to be among the FAB 5! I promise to use my powers for good and to eliminate undependable people from the earth LOL!

Thanks to each of you for leaving a comment! I absolutely love comments and feedback. Thanks for caring enough to write.

That was a SUPER DOPE concept.